The drive from Seattle to San Francisco along I-5 is a 720-mile panorama of changing biomes. Forest, farmland, and the occasional big city get very gradually drier, sparser, flatter. You pass a sign for the 45th parallel, marking equidistance between the equator and the North Pole. Then the road clogs with semis chugging their way up big craggy hills, up and up, and then you switch your foot from the gas to the brake and drop down the hills into more swathes of farmland, and more intense desert, with only the very occasional tiny town to get gas and bottles of cold water. Eventually, amid the dry hills, you see the first alien tower of a palm tree, and you know the desert is going to break soon.

Of course, I like the narrative arc on the drive back even better. Leaving Berkeley in the morning, you hit the desert in its element – bright and dry – without being too hot. That comes later, amid the rows and rows of fruit and nut trees, which turns into the mountains again, and into the land on the side of the mountains, now dominated by lower bushy produce crops and acres of flat grain land. You pass a sign for Lynn County, the Grass Seed Capital of the US. Finally, well into dusk, you hit the Washington border, and the first rain you’ve seen on the entire trip starts falling right on cue. Then you meet some friends in your old college town for a quick sandwich and tomato soup at 11:30 PM, and everything is set right with the world, letting you arrive back home by an exhausted but satisfied 1:30 AM.

I like this drive for giving a city kid a slice of agriculture. I’ve written about the temporal scale of developments in agriculture, but the spatial scale is just as incredible. About 50% of land in the US is agricultural. Growing the calorie-dense organisms that end up on my plate, or fueling someone’s car, or exported onto someone else’s plate, or someone else’s feedbag, is the result of an extraordinary amount of work and effort.

I talked about the plants – there’s trees for fruit and nuts, vines, grain, corn, a million kinds of produce. I only assume this gets more impressive when you go south from San Francisco. (In recent memory, I’ve only visited as far south as Palo Alto, and was shocked to discover a lemon tree. With lemons on it! In December! Who knew? Probably a lot of you.)

There’s also animals – aside from a half dozen alpacas and a few dozen horses, you spot many sheep and many, many cows from the highway. The cattle ranches were quite pretty and spacious – I wonder if this is luck, or if there’s some kind of effort to put the most attractive ranches close to the highway. Apparently there are actual feedlots along I-5 if you keep going south. I certainly didn’t notice any happy chicken farms along the way.

And then there are the bees.

Bees are humanity’s most numerous domesticated animal. You don’t see them, per se, since they are, well, bees. What you can see are the hives – stacks of white boxes like lost dresser drawers congregating in fields. Each box contains the life’s work of a colony of about 19,200 bees. 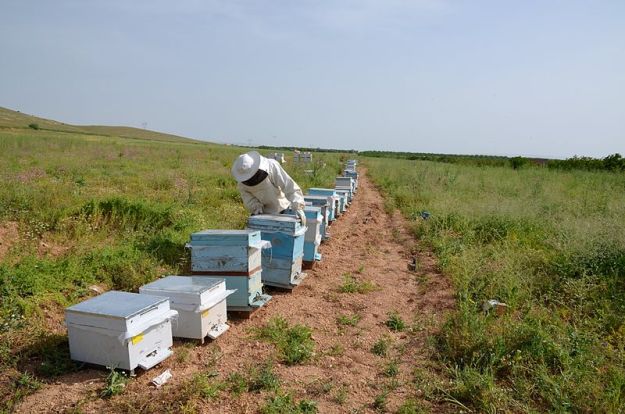 I forgot to start taking photos until it was already dark out, so here are some Wikimedia photos instead. If you want me to take more photos, feel free to ask for my paypal to fund me making the drive again. 😛 | Photo by Fahih Sahiner, CC BY-SA 4.0

Bees are enormously complicated and fascinating insects. They live in the densely packed hives described above, receiving chemical instructions by one breeding queen, and eusocially supporting her eggs that become the next generation of the hive. In the morning, individual bees leave the hive, fly around, and search for pollen sources, which they shove into pouches on their legs. Returning, if they’ve located a juicy pollen source, they describe it to other bees using an intricate physical code known as the waggle dance.

What images of this don’t clearly show is that in normal circumstances, this is done inside the hive, under complete darkness, surrounded by other bees who follow it with their antennae.

The gathered pollen is used to sustain the existing bees, and, of course, create honey – the sugar-rich substance that feeds the young bee larvae and the hive through winter. Each “drawer” of the modern Langstroth beehive – seen above – contains ten wooden frames, each filled in by the bees with a wax comb dripping with honey. At harvesting time, each frame is removed from the hive, the carefully placed wax caps covering each honey-filled comb are broken off, and the honey is extracted via centrifuge. (More on the harvesting practice.)

Each beehive makes about 25 pounds of harvestable honey in a season, and each pound of honey represents 55,000 miles flown by bees. Given the immense amount of animal labor put into this food, I want to investigate the claim that purchasing honey is a good thing from an animal welfare perspective.

I’m not about to say that people who care about animal welfare should be fine eating honey because bees don’t have moral worth, because I suspect that’s not true. I suspect that bees can and do suffer, and at the very least, that we should consider that they might. The capacity to suffer is evolutionary – it’s an incentive to flee from danger, learn from mistakes, and keep yourself safe when damaged. Bees have a large capacity to learn, remember, and exhibit altered behavior when distressed.

Like other social insects, however, bees also do a few things that contraindicate suffering in most senses, like voluntarily stinging invaders in a way that tears out some internal organs and leaves them at high risk of death. In addition, insects possibly don’t feel pain at the site of an injury (though I’m not sure how well studied this is over all insects) (more details). They may feel some kind of negative affect distinct from typical human pain. In any case, it seems like bee welfare is possibly important, and since there are 344,000,000,000,000 of them under our direct care, I’m inclined to err on the side of “being nice to them” lest we ignore an ongoing moral catastrophe just because we didn’t think we had incontrovertible proof at the time.

This is harder than it sounds, because of the almonds.

The beehives I saw on on I-5 don’t live there full-time. They’re there because of migratory beekeepers, who load hives into trucks and drive them all over the country to different fields of different crops. As we were all told in 3rd grade, bees are important pollinators, and while the fields of old were pollinated with a mix of wild insects and individually-managed hives, like other animal agriculture, the bees of today are managed on an industrial scale.

(We passed at least one truck that was mostly covered with a tarp, but had distinctive white boxes visible in the corners. I’m pretty sure that truck was full of bees.)

60-75% of the US’s commercial hives congregate around Valentine’s Day in the middle of California to pollinate almonds. When we say bees are important pollinators, one instance of this is that almonds are entirely dependent on bees – every single almond is the result of an almond tree flower pollinated by a bee. California grows 82% of the world’s almonds.

According to this Cornell University report, honeybees in the US provide:

Our agricultural system, and by extension, the food you eat is, in huge part, powered by those 344 trillion bees. Much of this bee power is provided by migratory beekeepers. In total, beekeepers in the US make about 30% of their money from honey, and 70% from renting out their bees for pollination.

Sidenote: All of the honey bees kept in the US are one species. (There are also 3000 wild bee species, as well as wild honey bees.) So we’re putting all of our faith in them. If you haven’t been living under a rock for the last decade, you may have heard of colony collapse disorder, which I’d wager is the kind of thing that becomes both more likely and more catastrophic when your system is built on an overburdened monoculture.

Does this mean you actively should eat honey? I really don’t know enough about economics to say that or not. If you’re averse to using animal products, I don’t believe you’re obligated to eat honey – there are many delicious products that do what honey does, from plain sugar to maple syrup to agave to vegan honey.

But if you don’t eat honey and tell other people not to eat honey, I imagine you’re doing that because of a belief that this will lead to fewer bees being brought into existence and used by humans. And if you have this belief that it’s better to have fewer bees used by humans, I’m very curious what you think they’ll be replaced with.

What if you want to reduce the amount of suffering comprised by honeybees in your diet, or in agriculture in general?

One thing people have thought of is encouraging pollination by wild bees and other insects. When thinking about the volume of honeybees you’d need to replace, though, you start to encounter real ethical questions about the welfare of those wild bees. Living in the wild as an insect is plausibly pretty nasty. (I don’t have the evidence either way on whether honey bees or wild bees have better lives – but that if you care about honey bees anyway, it bears considering that this would require humans replacing the huge number of honey bees with other life forms, and that the fact that they’d be living on their own in hedges next to a field, rather than in a wooden hive, doesn’t automatically mean they’ll be happier.)

In addition, scaling up wild pollinators to the scale that would be needed by commercial agriculture would be difficult. Possible, but a very hard problem.

You could eat crops that aren’t mostly pollinated by honeybees. This page lists some – a lot of vegetables make the list. Grains, cereals, and grasses also tend be wind-pollinated.

Beekeeping seems like it might be better than increasing the number of wild pollinators, but migratory beekeeping as a practice reduces bee lifespans, and increases stress markers and parasites compared to stationary hives. Reducing the amount of travel modern hives do might be helpful. Maybe we could just stop growing almonds?

It also seems completely possible to raise beehives that are only used for pollination and not honey. This still requires animal labor and more individual bees, but the bees would have less stressful lives.

Or look into robot pollinators.

None of these ideas feel satisfactory, though. I feel like we’ve made our nest of bees and now we have to sleep in it. Any ideas?

Truck full of beehives. | Photo by Wendy Seltzer. CC BY 2.0.

(Note: I’m aware that this piece is very US-centric. I’m not sure what the bee situation is other countries is like.)