I tried to answer this question by doing some reading. Why should we care?

Mammals don’t come anywhere near the top, but sure, they’re furry and warm and cute and also you’re one, so let’s begin here. Humans aren’t actually a bad call as far as larger organisms- there are 7.5 billion (7,500,000,000) of us crawling around the planet, handily beating out other close competitors.

Rule 1: If you want to make an organism numerous, association with humans is a good start.

Large wild mammals are not especially common. Cows (1.4 billion) have the largest non-human large mammal population, and sheep, pigs, and goats (~1 billion each) beat out all other competitors. The curious will be interested to know that there are 50% more cats globally than dogs (600,000,000 vs 400,000,000).

What about birds? As of 1997, between 200 and 400 billion (brought to us by the excellently titled paper, How Many Birds Are There?) The most numerous wild bird is the red-billed quelea, which terrorizes African farmers in enormous flocks (1.5 billion). (The Smithsonian flagrantly claims it’s the house sparrow, but the population of those is maybe half a billion and dropping.) Again, association with human comes in- the most common bird is the chicken, at 19 billion (19,000,000,000) or 2.5 chickens per human.

Rule 2: Whatever’s happening in the ocean is much bigger and much wackier than anything on land.

You’ve probably never heard of the bristlemouth, genus Cyclothone, a three-inch-long deep-ocean fish with a big mouth and weird teeth. As it happens, most of the planet’s surface is deep ocean. Unspecified “icthyologists” found by the New York Times speculate a population in the hundreds of trillions (> 200,000,000,000,000).

Their sheer population has only recently come to light- they’re found many meters deep into the water column and don’t surface at night, and the extent of their dominion has only recently been discovered via trawling with fine nets and the dawn of deep-sea exploration. If these “ichthyologists” can be believed, the bristlemouth is probably the most common vertebrate on earth.

Maybe you’re confused as to how there could be so many bristlemouths, since they’re relatively large compared to, say, insects. I’m not actually convinced that the trillions number is correct, but nonetheless, consider: The oceans represent 75% of the planet’s surface, and while land animals are more or less limited to a flat surface, ocean animals can “stack” in three dimensions.

Finally, a fun fact: If a bristlemouth brain weighs as much as a goldfish brain, then:

Draw your own conclusions.

Rule 3: Ant biologists need to get it together. 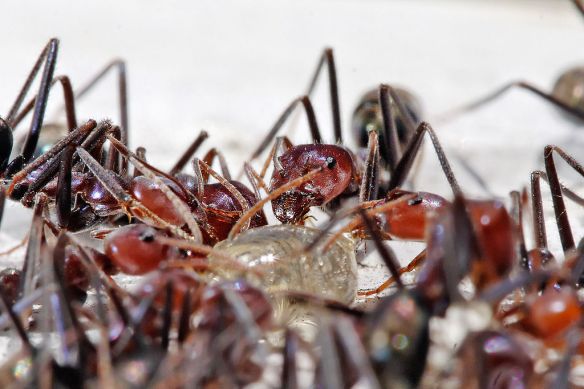 All the world’s ants are popularly said to weigh the same amount as all the world’s human beings. It takes 16 million ants to outweigh a human, and since your garden-variety ant colony has about 4,000 ants, that would be 40,000 ant colonies per person.

This sounds ridiculous, and a University of Sussex professor suggests that it is– that ants may have outweighed humans earlier in our existence, but we’ve spread too far too quickly for them to catch up. This article posits 100,000,000,000,000 (1×1014) ants.

What’s going on here? To our instinctive brains, both of those guesses occupy a similar conceptual space as “really large numbers”, but they’re not close. They’re ten orders of magnitude apart. One of these numbers is ten billion times larger than the other. There’s one quantity of ants, or there’s ten billion times that number of ants. What?!

I have no idea. Worse yet, they’re both from the same source. The BBC can’t be a reliable news source if they don’t have a standard journalistic value for “total number of ants” that’s rough to within oh, say, five orders of magnitude.

Fortunately, we can perform a sanity check. The earth has 1.5×1014 square meters of dry land.

Even if the most common ant species is just 1% of all ants, where ants ranks depends drastically on which value the right value is. Bristlemouths might outnumber them, or they might not. Dear ant researchers: work on this, but at the least, stop telling people there are 1×1024 ants. That’s too many ants.

(While researching this, I also learned about the long and short scales– everyone uses the same “million”, but my “trillion” may not be the same as your “trillion”. While normally I try to avoid being prescriptivist about language, this is a terrible use of words and everybody should either use lots of zeroes or scientific notation from here on out. Ugh. Anyways.)

The antarctic krill is the foundation of the antarctic ecosystem. It feeds whales, seals, squids, fish, and everything else. 500 million tons of it exist, and Wikipedia claims it’s probably the most abundant species on the planet. Using Wikipedia’s mass value of up to 2 grams (say, 1.5 grams on average), that’s 3×1014 (300,000,000,000,000) krill.

Let’s talk about uncertainty. There are a couple other candidates. They may easily hold the title, but I don’t know because nobody has done the research. There are certainly plausible reasons to suspect any of them of holding the title, and we can use Fermi calculations for the sake of a guess, but I don’t expect these to be very accurate.

Most of the guesses above did come with specific numbers, but aren’t necessarily completely trustworthy. Articles written about ants, antarctic krill, nematodes, and copepods have all variously claimed to be the most common animal. It seems like this could happen because of the availability bias– if you’re a krill biologist, and someone asks you what the most common animal is, and you know that there are a whole lot of krill, you’re probably going to say krill.

Narrowing down a common species is also more difficult- I can attest (from work with tiny snails) that doing field identification via microscope is the worst. So presumably, most studies don’t do it, and focus on the broader picture.

Tiny free-swimming ocean crustaceans, at the root of many food chains. 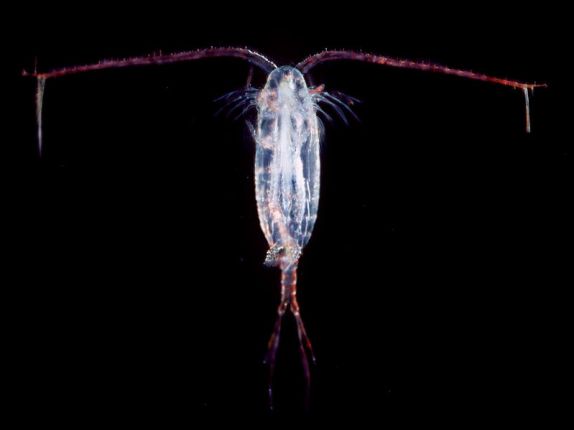 Some scientists say they form the largest animal biomass on earth.

Copepods almost certainly contribute far more to the secondary productivity of the world’s oceans, and to the global ocean carbon sink than krill, and perhaps more than all other groups of organisms together. – Wikipedia

Also, bristlemouths eat them. Oceanic food chains don’t always work the same way land food chain pyramids do- there’s not necessarily more biomass at the base of the chain than at the top– but as far as I know, it’s strong evidence for them having more biomass.

Frustratingly, as with the nematodes, nobody seems to know what the most common copepod is.

But I think we can do better.One study found an average 20 zooplankton per cubic meter in the Atlantic ocean, with occasional high spikes and huge seasonal variation. If we assume that such a number is constant over all the oceans and throughout the euphotic zone (the top layer of the ocean that receives sunlight and supports photosynthesis), that adds up to at least 5.78×1017 plankton. Since we know copepods are quite common, let’s say that 50% of the zooplankton is copepods, and that the most common species represents 1% of all copepods. That’s: 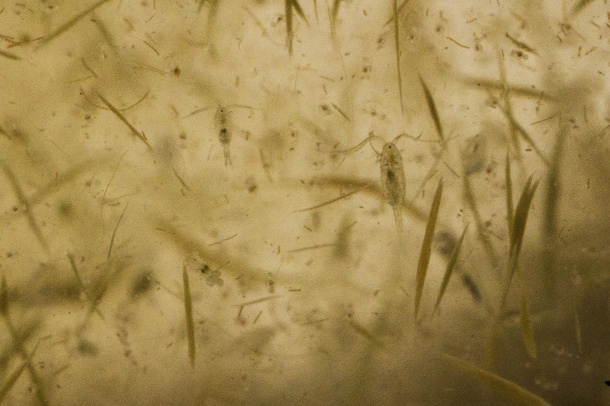 They are ubiquitous in freshwater, marine, and terrestrial environments, where they often outnumber other animals in both individual and species counts, and are found in locations as diverse as mountains, deserts and oceanic trenches. – Wikipedia

Everyone (read: all scientists who have expressed an opinion on the matter) seems to think that nematodes are incredibly numerous. That said, Nematoda is a very broad umbrella- sort of like saying that there aren’t very many Chordates (the phylum that contains all vertebrates plus a handful of squishy sea creatures.) Bristlemouths, meanwhile, are narrowed down to a single genus of only a dozen species.

My guesses for a candidate Most Common Nematode are:

(Why these two? My educated guess is that smaller animals tend to be more common, and that the smallest species are routinely parasites. Other small species tend to be among the more numerous free-living animals- think mice and Palegibacter ubique.)

My extrapolations (more details on those numbers) from a 2006 study of benthic microfauna – very small animals living on the ocean floor at various depths – suggest that there are maybe 9.03×1019 such critters in Earth’s oceans. These include nematodes, benthic copepods, and other species. As with copepods, let’s guess that half of these are nematodes, and that 0.1% of nematodes are in the most prolific species.

This aligns well with another, rougher back of the envelope calculation from a different source:

6 thoughts on “What’s the most common animal species?”